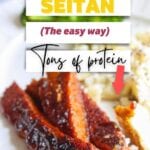 Easy vegan seitan recipe. It’s never been easier to make seitan from scratch. Seitan is high in protein and low in carbs and fat and has zero cholesterol. It’s a fantastic meat substitute and has been around for centuries. It’s chewy versatility is a great meat replacement for vegans, vegetarians and flexitarians.

Seitan is when you mix pure vital wheat gluten with water or broth and seasonings. Vital wheat gluten is the protein in wheat separated from the starch. It’s pure wheat protein. It’s also called wheat meat.

Gluten is the main protein found in wheat. It’s what gives bread dough its elastic and stretchy nature and makes bread nice and chewy.

Even though it seems like a fad that only vegans eat, seitan has been around for a long time.

Click here to get your FREE meal plan and grocery list printables to help you stay organized each week!

Buddhist monks have been eating seitan for thousands of years. People even ate it during the great depression when meat was scarce and they needed their meals to be more filling.

Unless you have celiac disease or gluten sensitivity, seitan is completely safe and healthy to eat.

Seitan is a great source of protein for vegans and vegetarians.

Seitan is a delicious meat alternative that is also an amazing source of protein. It has more protein than chicken and contains 70 grams of protein per 100 grams.

It’s is also low in carbohydrates and fat. It’s low in carbs because the starch and bran have been washed away to leave only the wheat gluten.

If you’re a vegan, make sure to also include beans in your diet since seitan doesn’t have a high amount of the essential amino acid lysine.

There are two ways to make seitan.

Need help organizing your weekly meal plan? Get my FREE meal plan and shopping list printables to help you stay organized each week!

2. Or you can make it in about an hour by skipping the washing part and just starting with vital wheat gluten flour. This takes only 10 minutes to make and then it just simmers in a broth for an hour. You mix together the dry ingredients in a large bowl, then add the wet ingredients and knead the dough to activate the gluten. You can then either simmer the seitan pieces in a large pot of vegetable broth or wrap them up tightly and steam them in a steamer basket. This is the way I’m going to show you in the recipe card below.

To make the base I use:

The secret to the perfect, meaty texture when making your own seitan is to make sure you don’t boil it. This will create large pockets. You want a nice, gentle simmer. Bring the broth to a boil before adding the seitan, then turn it down to medium low once it reaches that heat. Add the seitan and let it gently simmer.

Make sure to check the broth halfway through, to make sure it didn’t all evaporate.

Feel free to use any seasonings you’d like. The suggestions I give are just my personal preference.

If you don’t have nutritional yeast, don’t worry. It’s not super essential to the recipe, it just adds a little savory flavor.

The more you knead the dough, the chewier and tougher the seitan will get. So if you want your seitan to have a tender texture, only knead it for five minutes or so.

If you want a firmer texture, like for a seitan roast, or seitan kebabs, knead it for at least 10 minutes and let it sit for 10 minutes before cooking, to let the gluten strands activate.

How to store seitan

You can keep seitan in its broth in the fridge in an airtight container for about 5-7 days. I also love straining the broth away and letting it sit in a marinade in the fridge. The texture of seitan changes slightly as it cools. It won’t be as puffy.

You can also freeze it after straining the liquid away and putting it in a freezer friendly air tight bag.

How to use seitan

You can use seitan in any way that you would chicken, beef or tofu. Seitan goes great in Asian recipes like Mongolian beef or a vegan butter chicken or a stir fry.

I also love to marinate it in bbq sauce and then cook it on a grill, or cast iron skillet.

Recipes that work well with seitan

If you liked this recipe, leave a star rating on the recipe card, a comment below and pin it to Pinterest. 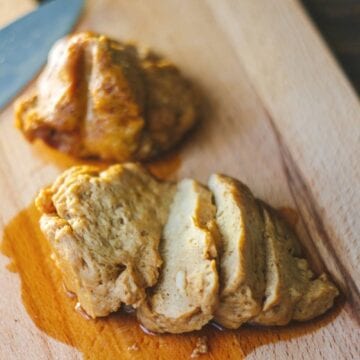 US Customary or Metric

Store seitan in the fridge in it’s broth, or a marinade of your choice for about five days.  Drain and seal the seitan and it can be frozen. Let it completely thaw before cooking.  Seitan can be used any way you would chicken or beef. I love marinating it in bbq sauce and then cooking it on a grill. I also love using it in Asian recipes like Mongolian beef.  I didn’t show this in the video, but before simmering the seitan, cut it into four even pieces. This ensures that the center gets cooked and that each piece is cooked evenly.

Maria is the creator of the blog and YouTube channel Damn Tasty Vegan. She has been a vegetarian since 2005 and vegan since 2015. She loves showing new vegans how easy and delicious living a vegan lifestyle can be. She is passionate about animal welfare and strives to help change the way animals are viewed and treated, by helping people transition to a vegan lifestyle.

Hi, I'm Maria Rose! I'm a professional singer by night, and recipe developer by day. I run this blog and am also the creator of the One Month (30 minute) Meal Plan. I love helping people learn how to cook easy and delicious plant based meals.

We use cookies on our website to give you the most relevant experience by remembering your preferences and repeat visits. By clicking “Accept”, you consent to the use of ALL the cookies.
Cookie settingsACCEPT
Manage consent

This website uses cookies to improve your experience while you navigate through the website. Out of these, the cookies that are categorized as necessary are stored on your browser as they are essential for the working of basic functionalities of the website. We also use third-party cookies that help us analyze and understand how you use this website. These cookies will be stored in your browser only with your consent. You also have the option to opt-out of these cookies. But opting out of some of these cookies may affect your browsing experience.
Necessary Always Enabled
Necessary cookies are absolutely essential for the website to function properly. This category only includes cookies that ensures basic functionalities and security features of the website. These cookies do not store any personal information.
Non-necessary
Any cookies that may not be particularly necessary for the website to function and is used specifically to collect user personal data via analytics, ads, other embedded contents are termed as non-necessary cookies. It is mandatory to procure user consent prior to running these cookies on your website.
SAVE & ACCEPT