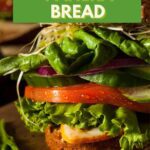 Vegan Panera options in 2023. It’s never been easier to eat vegan. Learn which sandwiches, breads, soups and bagels are vegan. How to order vegan and customize a meal at Panera Bread

When you order a sandwich at Panera Bread, make sure to order it on one of these breads:

Here are the vegan bagels at Panera Bread:

Salads at Panera Bread make for a delicious and healthy lunch. They’re also easy to order vegan with a few alterations. Get a cup of ten vegetable soup to make this a little more filling.

Click here to get your FREE meal plan and grocery list printables to help you stay organized each week!

Unfortunately, since they stopped serving the Ten Vegetable Soup, they no longer have any dairy free and vegan soups.

If you’d like to make a vegan version of their soups at home, check out my vegan broccoli cheddar soup and vegan black bean soup recipes.

Panera does offer one vegan sandwich if you modify it slightly.

The warm bowl are a delicious option for lunch and they can be easily customized.

Does Panera Bread have any vegan baked goods?

At the moment, Panera doesn’t offer any vegan baked goods or desserts since they all contain dairy and eggs.

It’s never been easier to order vegan at Panera Bread. With a few customizations, a few of the options easily become vegan. Stay up to date with Panera Bread’s vegan menu.

Maria is the creator of the blog and YouTube channel Damn Tasty Vegan. She has been a vegetarian since 2005 and vegan since 2015. She loves showing new vegans how easy and delicious living a vegan lifestyle can be. She is passionate about animal welfare and strives to help change the way animals are viewed and treated, by helping people transition to a vegan lifestyle.

Hi, I'm Maria Rose! I'm a professional singer by night, and recipe developer by day. I run this blog and am also the creator of the One Month (30 minute) Meal Plan. I love helping people learn how to cook easy and delicious plant based meals.

We use cookies on our website to give you the most relevant experience by remembering your preferences and repeat visits. By clicking “Accept”, you consent to the use of ALL the cookies.
Cookie settingsACCEPT
Manage consent

This website uses cookies to improve your experience while you navigate through the website. Out of these, the cookies that are categorized as necessary are stored on your browser as they are essential for the working of basic functionalities of the website. We also use third-party cookies that help us analyze and understand how you use this website. These cookies will be stored in your browser only with your consent. You also have the option to opt-out of these cookies. But opting out of some of these cookies may affect your browsing experience.
Necessary Always Enabled
Necessary cookies are absolutely essential for the website to function properly. This category only includes cookies that ensures basic functionalities and security features of the website. These cookies do not store any personal information.
Non-necessary
Any cookies that may not be particularly necessary for the website to function and is used specifically to collect user personal data via analytics, ads, other embedded contents are termed as non-necessary cookies. It is mandatory to procure user consent prior to running these cookies on your website.
SAVE & ACCEPT